Cities in the Global South: crucibles of change

The world is facing unprecedented rates of urbanisation, mainly in the Global South. Here, migrants seeking the benefits of cities head to swollen places already ill‑equipped to sustain burgeoning needs.

Mega slum-cities are mushrooming, and we'll need a 360‑degree change in thinking to deal with urbanisation in the Global South, says Professor Gordon Pirie, deputy director of the African Centre for Cities.

The United Nations estimates that the world's slum dwellers will reach two billion by 2030. The Global South will carry this burden: Africa, Central and Latin America, and most of Asia – 157 of the world's recognised 184 states.

The largest cities are now concentrated in countries that already confront a mix of poverty, environmental degradation, human and civil rights abuses, ethnic and regional conflicts, and refugees.

But these are also the sites of emerging markets offering hope for economic growth, innovation and investment.

Asia has the largest number of urban agglomerations, with Africa in second place. India's Maharashtra slum city near Mumbai is the world's largest, and expected to accommodate over 20 million people by 2017. In that time, India's urban slum population is expected to reach 104 million.

Absorbing the current rates of urbanisation in the Global South will require "a massive leap of imagination, knowledge and collaboration", says Pirie.

But there are few precedents for the Global South.

"We probably cannot and should not replicate the urbanisation types and trajectories of the Global North," says Pirie.

Neither do we want cities only built for the rich and elite – modern, glossy exhibits like Dubai for image‑conscious African leaders and developers.

Or smart cities, dependent on computer-controlled infrastructure and resources.

"It's a challenge for education institutions and researchers, but if steps aren't taken soon, Africa's crisis of poverty, inequality and lack of resources will deepen."

With this in mind, UCT's African Centre for Cities (ACC) aims to understand and work with cities on their own terms, and to create the interdisciplinary knowledge base needed to support the emergence of more equitable African cities; cities that are livable and sustainable.

Working with policymakers and planners, the ACC, a UCT signature theme, has become the pre‑eminent hub of multidisciplinary urban research on the continent. It is an intellectual consortium of urban planners, political scientists, climate change specialists, sociologists and geographers.

The ACC is working with African partner institutions to set up a continent-wide network of urban institutes to train the graduates who will be needed to manage our cities in the future.

In this respect, India has taken the lead. The new Indian Institute for Human Settlements in Bangalore annually graduates some 80 PhDs in city planning, architecture, design, management, and planning.

Africa is some way behind. South Africa for example, has never had a coherent urban policy. Recently the Presidency co‑opted ACC director Professor Edgar Pieterse to draft one, as part of Trevor Manuel's National Development Plan. 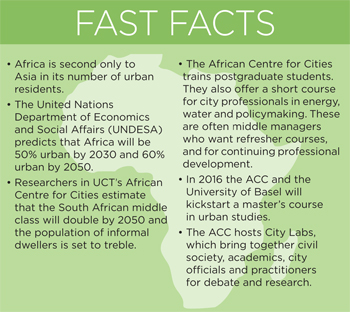 So what does make for an exemplary, workable city in the Global South?

"It's a mix of elements and we shouldn't think too technically, managerially and instrumentally about cities. It's partly about revisiting our notion of what a city is. We should stop demonising a city like Kinshasa, so difficult to read but with its own inner success and dynamic. There is workability and vibrancy there, a bit like District Six and Sophiatown on a larger scale."

We should not lose sight of the "soul of the city", he adds. "Slums may have wretched physical fabric and conditions, but they are toeholds for millions of desperate people. They achieve amazing things despite diabolical circumstances."

While there are few precedents we should adopt from the Global North, with its different past and present, Pirie suggests that northern cities might need to look to Africa for answers to their future challenges.

"Africa is a glimpse of the urban future: there will be a lot to learn from how our cities deal with resource shortages, climate change, food security, turf battles, and rights and access to slim budgets and to fractured political power."

"Cities are sites of tremendous difficulties, but also crucibles of change."

Faculty Focus - Engineering & the Built Environment
A case study: How to turn the numbers around 28 Sep 2015
TOP