Ingenuity in the making

The Faculty of Engineering & the Built Environment is home to some clever machines and some canny experimental robots, produced by lecturers and postgraduate students. Here is a sample of the faculty's workhorses and prototypes.

Electrical engineering's Dr Amir Patel (in picture) built two small robot cars feautring actuated tails for his PhD, Dima I and Dima II (a name derived from a Sotho word meaning "flash of lightning"). This technology was inspired by the mechanics of a cheetah's tail, with the goal being to provide a deeper understanding of these specialised predators.

"The robot is inspired by the cheetah, which actively controls its tail during high‑speed manoeuvres," says Patel. "Similarly, the tail (of Dima I) allows the robot to stabilise itself during rapid turns – much like the cheetah does when chasing prey."

"These [robot cars] were deliberately designed to be able to achieve high speeds with a high centre of mass, a combination that works best, (and usually only) when driving in straight lines. "Turning at any speed you might charitably call 'exciting' leads to an immediate toppling over. But the addition of an actuated tail that can swing in the roll axis of the robot effectively keeps it stable," said Patel. "The robots can make stable turns at twice the speed."

The actuated tail was upgraded in the second version of the robot (Dima II) to enable stabilisation of turning, as well as rapid linear acceleration – much like the cheetah.

This technology has promising applications in wheeled robotics – particularly for search‑and‑rescue mission where time is critical, says Patel.

Additionally, future legged robots will benefit from a tail when manoeuvring at high speeds in unstructured environments. 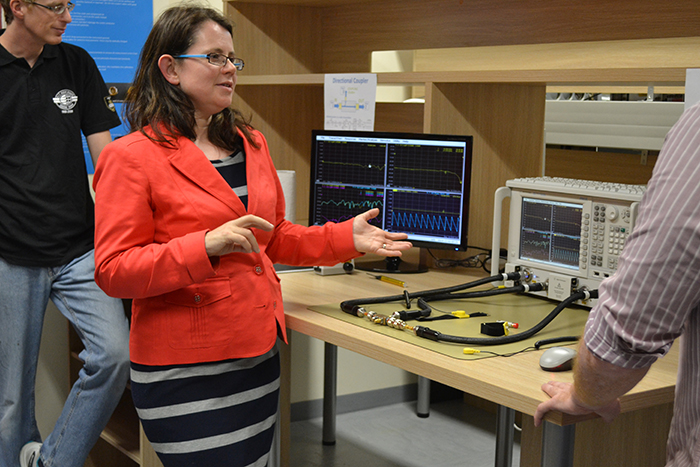 This instrument is used to measure highfrequency electrical networks in radar systems, radio astronomy receivers and communications applications and is typically used to characterise the electrical performance of components and parts of these systems.

The network analyser operates over microwave and millimetre‑wave frequencies with an impressively wide bandwidth up to 67 GHz. The instrument is hosted in the upgraded Microwave Laboratory and is used for educational and research purposes by the RRSG's senior undergraduates, postgraduates and staff. 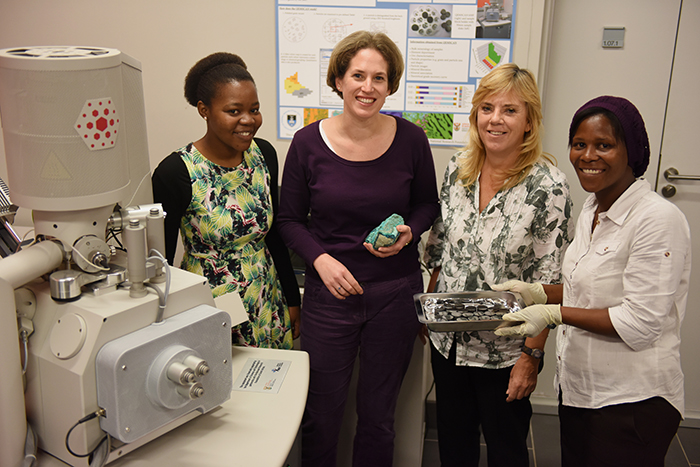 Extracting valuable minerals from ores with grades as low as 3g/ton is a challenge. "Tools such as QEMSCAN are key to unlocking the value of these ores," said QEMSCAN facility manager Dr Megan Becker of the Centre for Minerals Research.

Custom‑designed for the mining industry, the QEMSCAN (Quantitative Evaluation of Minerals by Scanning Electron Microscopy) is a state‑of‑the‑art automated mineral analyser. It offers fast, reproducible and statistically reliable quantitative analysis of minerals and certain man‑made materials.

"QEMSCAN tells us which minerals host the valuable metals, how fine we need to grind to liberate the valuable minerals, what do the milled particles look like – critical information needed to develop a sustainable and energy efficient beneficiation strategy," adds Becker.

The CMR QEMSCAN, housed in the New Engineering Building, is predominantly used for mining- and mineral processing‑related research. However, any study needing detailed quantitative mineralogical and textural information of particulates can use QEMSCAN. Possible applications included metal recycling, air pollution and dust monitoring, environmental geochemistry, viticulture and even forensic studies. The QEMSCAN was financially supported by the Department of Science and Technology in partnership with the National Research Foundation, South Africa. 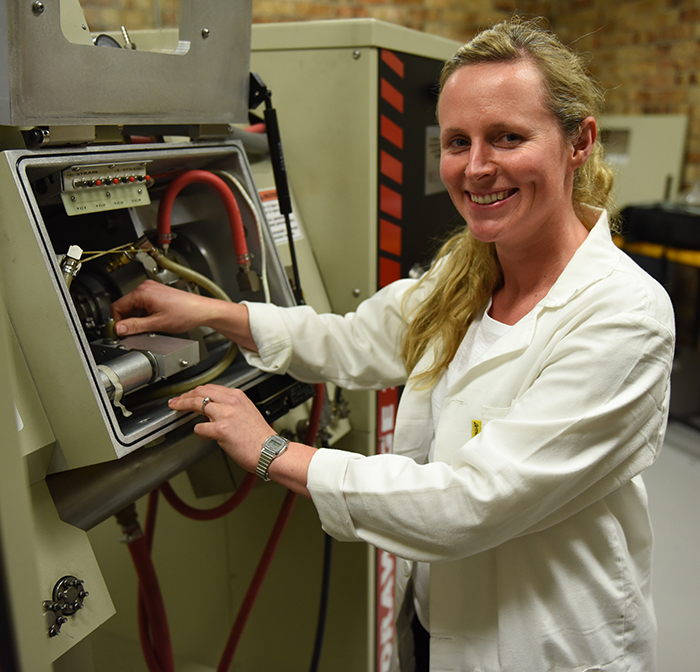 Dr Sarah George with the Gleeble 3800. Photo by Je'nine May.

The Gleeble 3800 thermomechanical process simulator is a workhorse in the Centre for Materials Engineering, allowing researchers to perform high‑temperature deformation simulations of metals like aluminium and stainless steel at high strain rates.

This gives researchers the opportunity to simulate the processing parameters experienced during industrial manufacturing and production, says the centre's Dr Sarah George. Another interesting area where the Gleeble 3800 has been used is research into aluminium rolled sheet production.

"With South Africa's move to the local production of an all‑aluminium beverage can, where previously the top, or can‑end, was an aluminium alloy and the can‑body was made from tin‑plate steel, there has been a dramatic increase in industry related research in the field of aluminium alloys, focusing on alloy choice and processing parameters."

George adds that currently their most relevant research is into creep damage of piping materials used by Eskom power plants, where the material is susceptible to damage owing to the high temperature environments.

"This research looks at simulating the welding cycles that are used when parts of creep‑damaged pipes need to be replaced insitu during maintenance on the plants, and how this affects the remaining predicted service life of that part."

Although the Gleeble 3800 has been part of the furniture in the centre for four years, George says the team is still finding new and exciting ways to use it in metal‑related projects.

Staying with the theme of producing rolled products, the centre also has a direct powderrolling facility, which allows for the conversion of titanium powders into sheet metal.

"The optimisation of this process at our centre will contribute substantially to the innovative titanium oxide to metal powder process which has been developed at the CSIR, through support provided from the Department of Science and Technology."

The Robotics and Agents Research Laboratory harnesses postgraduate students from electrical and mechanical engineering to design research platforms and robots. Some of this work is driven by demand from industry, such as the mining and security industries, for reconnaissance and rescue; robots are deployed in unstable buildings and sites to search for human survivors of natural disaster or acts of terrorism.

1. The six‑legged walker robot looks and walks much like a spider and acts as a research platform and is used mainly to demonstrate mechanical structures.

The walker can travel up a wall of cliff, inch by inch, by finding the smallest flat spaces and using these as 'footholds' to pull itself up, one leg at a time. Every leg has three independent motors, one for each joint – a total of 18 motors, all working independently.

The idea is to enhance its capabilities via an artificial intelligence team the team collaborates with to programme the walker for path‑planning and learning. This means it will be able to store information, learn from its mistakes, and come up with new strategies to suit conditions.

2. The Ratel is a large urban search and rescue robot. It features tank tracks for stability and maneouvrability and flippers that guide rotation. It can climb stairs, its arms have multiple degrees of freedom, and it can grip and release objects. The sensor payload head is designed to operate cameras, thermal cameras, carbon dioxide sensors, speakers, and a two‑way radio.

"So, if it finds someone trapped in a building, it can determine whether they're alive, provide assistance, and remain at the location to provide two‑way feedback until the rescue or recovery has been completed," says lecturer Tracy Booysen.

3. The Scarab is a 'pro‑ball' robot with a camera, microphone and lights designed to be cheap and replaceable and to operate in structurally compromised situations to ascertain if there are survivors (before rescuers are deployed). It's also useful for police and security forces and private security companies for reconnoitering the scenes of suspected criminal or enemy activity to ascertain the risks. "You can just throw it over a wall, for example, and it drives around gathering information," Booysen says.

It is designed to be worn by the rescue operator in the field. This allows for in‑field charging and easy deployment. Because the batteries that allow for this quick charging can be quite volatile if not properly protected – a dummy is used for all testing for safety. 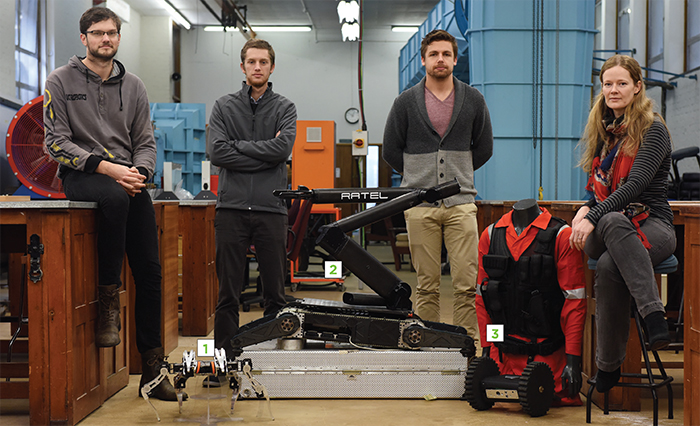 From left are students Max Finbow, James Hepworth, Timothy Hope and lecturer Tracy Booysen with
1. The six-legged walking robot 2. The Ratel 3. The Scarab with dummy. Photo by Je'nine May.

Faculty Focus - Engineering & the Built Environment
A case study: How to turn the numbers around 28 Sep 2015