UCT's Convocation, the body of the university's graduates, gathered for a special general meeting on 7 April 2015. The purpose was to allow its members to express their opinions on the future of the Cecil John Rhodes statue on UCT's upper campus, as well as on broader transformation issues.

Members expressed a wide range of views during the two-hour meeting. In closing, Professor Barney Pityana, president of Convocation, said that a very important message for Council, UCT and South Africa as a whole was that transformation in our country cannot be a buzzword, but must be the lifeblood of the country and the university. UCT, he said, needed to make a statement that showed its leadership on this, and its vision for the country.

The special general meeting was called by Pityana to give members the opportunity to give their views on the much-debated statue. It was one of various platforms on which UCT staff, students and alumni could share their opinions.

Building expertise through research is the best investment SA can make in its future By not investing in research, we risk allowing foreign firms to mine our geological riches, said UCT VC Prof Mamokgethi Phakeng. 25 Feb 2021 Republished

‘An enthusiastic champion of the interdisciplinary project’ Professor Deborah Posel, research professor at the University of the Free State and UCT emeritus professor, reflects on Stuart Saunders’ significant impact on the humanities. 24 Feb 2021 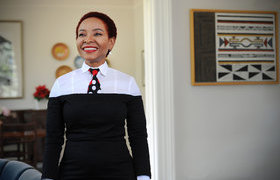