UCT to honour pioneers in the arts, science and law

At its December graduation ceremonies from 12 to 18 December UCT will award honorary degrees to five individuals who have made a significant contribution to their areas of knowledge and practice - and to society as a whole. They are pioneering physicist Professor Jonathan Ellis, Cape Town-born, world-renowned artist Marlene Dumas, Adrian Kohler and Basil Jones of the Handspring Puppet Company (one of the world's best known and respected puppet companies), and legal expert Nicholas 'Fink' Haysom. 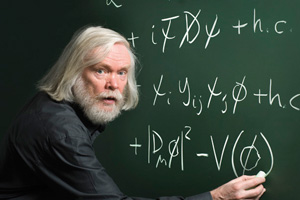 
Born in 1946 in London, Ellis earned his PhD in theoretical particle physics from Cambridge University in 1971. After postdoctoral positions at the Stanford Linear Accelerator Centre and the California Institute of Technology, he joined the European Centre for Nuclear Research (CERN) in Geneva, Switzerland, where he was deputy leader of the Theoretical Physics division from 1979 to 1982 and from 1984 to 1987, and leader from 1988 to 1994. He is currently the Clerk Maxwell Professor of Theoretical Physics at King's College, London.

Ellis is one of the pioneers of research at the interface between particle physics, astrophysics, cosmology and quantum gravity. Our understanding of the world and its origins has changed forever under his influence. In 1976 he proposed searching for gluons, the carrier particles of the strong interactions via 3-jet events in electron-positron annihilation. This search was then carried out three years later at the Deutsches Elektronen-Synchrotron (German Electron Synchrotron) or DESY laboratory in Germany, resulting in the discovery of the gluon.

UCT will confer an honorary doctorate in recognition of Ellis's exceptional and ground-breaking contributions to the understanding of fundamental physics and astrophysics, and for the numerous contributions he has made over the past decade to promote physics in South Africa, including the South Africa-CERN programme and the series of African Schools of Physics lectures. 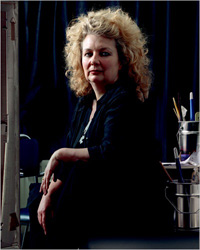 
Widely regarded as one of the most influential painters working today, Dumas has continuously explored the complex range of human emotions in her work, often probing questions of gender, race, sexuality and economic inequality. Born in Cape Town in 1953, she completed her fine arts degree at UCT's Michaelis School of Fine Art in 1975 before attending the Ateliers '63 in Haarlem, Netherlands, for two years. She studied at the Psychological Institute at the University of Amsterdam in the Netherlands from 1979 to 1980.

Dumas' distinctive interest in and use of photographic sources in her painting has enjoyed sustained critical reception, as has her courage in handling sensitive topics of racial and sexual violence and mortality. Her work explores constructions of identity and the fluid distinctions between the public and the private. Dumas' achievements were capped most recently by her major retrospective exhibition, Measuring Your Own Grave, at the Museum of Modern Art in New York. Her work is in collections in many countries.

Dumas possesses a rare generosity and commitment to art students and emerging artists alike. Over the years she has maintained a strong interest in young artists in the country of her birth, and has initiated many important events and supported many young artists materially, by mentoring and in other ways. When she received the prestigious David Röell prize from the Prince Bernhard Cultural Fund in 1998, she chose to share her winnings with the South African National Gallery to initiate Fresh, a developmental programme focusing on promising young South African artists. 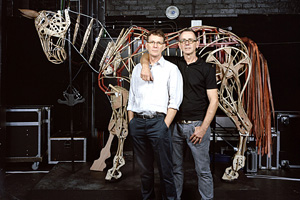 
UCT will honour Adrian Kohler and Basil Jones for their outstanding contribution to contemporary theatre through the medium of puppetry. Both graduated from the Michaelis School of Fine Art at UCT in 1974. In 1981 they established the Handspring Puppet Company (initially with two other Michaelis graduates). It has since become one of the best known and respected puppet companies in the world, with a wide international reputation.

The special genius of Jones and Kohler's work has been to bring their training at Michaelis and their imagination as artists and sculptors to bear on their interest in theatrical and performing traditions. Their collaboration with artists such as William Kentridge, and more recently with the Royal National Theatre's Warhorse project, has brought their work to international attention. The accolades they have received reflect the astonishment with which audiences have encountered the powerful assimilation of animated puppet-characters, sculpture, puppet-mastery, and performance.

Their work represents an original integration of art and performance that has come about through a formal understanding of three-dimensional art and a deep engagement with the power of sculpture and performance in Africa. Their ability to load the objects they make with extraordinary emotional range and dramatic power makes theirs a truly unique and innovative contribution to creative work in South Africa. 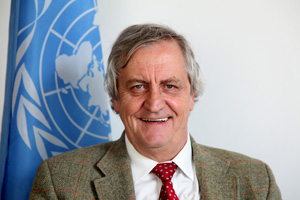 
Haysom has devoted his life to public service and the vindication of human rights, both in South Africa and internationally, but particularly in Africa. He graduated with a BA Hons from the University of Natal in 1975 and an LLB from UCT in 1978. He was admitted as an attorney in 1981 and joined the Centre for Applied Legal Studies at the University of the Witwatersrand, a pioneer institute engaged in academic research and education, but also in bringing precedent-setting cases in human rights. He published important research into the legal rights of farm workers and the violence employed by the security forces during the states of emergency. He was detained on several occasions, and banned.

In the 1990s Haysom was directly involved as both a negotiator and an advisor in the negotiation of South Africa's interim and final constitutions. He was appointed to represent the Constitutional Assembly and brief the legal team in the Certification of the Final Constitution proceedings in the Constitutional Court. Between 1994 and 1999 he served as President Nelson Mandela's legal advisor; and at Mandela's request, worked as a peace facilitator in Burundi. He was subsequently called on to assist in facilitating the peace talks in Sudan. He helped draft and negotiate the ground-breaking Machakos Protocol, which formed the basis of the other protocols on wealth-sharing, power-sharing and security, and ultimately the Comprehensive Peace Agreement in 2005.

In 2005 Haysom joined the United Nations to head its Constitutional Support Unit in Iraq, and in 2007 he was appointed Political Director in the Office of the Secretary-General. He has advised missions on conflict in Afghanistan and Kosovo, and advised on constitutional processes in Tunisia. He continues to lecture and write on issues relating to conflict resolution and constitution-making, on which he is now regarded internationally as a leading expert.