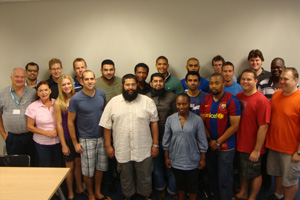 Radar technology made its name just before and during the Second World War.

Six or so decades on, scholarly and industrial interest - and use - hasn't waned a bit. Quite the contrary, in fact. In 2015, indigenous radar in South Africa will be 75 years old, and to mark the occasion the country will get to host its first International Radar Conference that year.

The continued interest in the subject was also highlighted when UCT launched an international taught master's of engineering programme, with a focus on radar and electronic defence, at the beginning of 2011. Now that programme will celebrate the graduation of its first students when Stephen Middleton and Jurgen Strydom are capped in December.

It's a course that stands out for a number of reasons, explains course convenor Professor Michael Inggs, who leads UCT's Radar Remote Sensing Group (operating since 1988). For one thing, it was established at the behest of industry. And to show their commitment to the programme, the likes of the Council of Scientific and Industrial Research, aka the CSIR, and international partners and industry all chipped to get the course rolling and keep it going.

It's also international in other ways. Most of the students hail from other countries (it's hoped that soon, internationals will make up 75% of student numbers), as do the lecturers - 'the best' teaching staff, drawn on because of their expertise in specific fields, have been recruited from Italy, the Netherlands, the UK and the US.

The modular programme was designed with non-residential and international students in mind. Students attend intensive week-long lectures and seminar's and then go off and work on projects and assignments on their own, communicating electronically with lecturers and supervisors every week. The programme culminates in a written examination.

The degree was established, in part, to keep recent graduates and those already in industry up to date with the latest developments in radar technology. Something like 60% of all research work in the geosciences involves some sort of radar technology, explains Inggs.

Archaeologists use it to detect objects buried underground. Vegetation and land-use mapping has become dependent on radar. It has become an indispensable part of disaster monitoring. Astronomers use it to observe objects in deep space. And let's not even talk of all its (sometimes dark and scary) military uses.

"There are just more and more applications being found every day," says Inggs.

Like the discipline itself, the course, just two years old, is expanding. Course partners have been encouraged to introduce their own specialisations into the programme, so Stellenbosch University has been running an advanced microwave antenna course for the programme, while the University of Pretoria has contributed a course on data fusion and tracking.

The programme has about 23 students registered currently, with another dozen or so expected to sign up in 2013.

A radar system wouldn't have to be all that sophisticated to pick up on that kind of growth.