From 'assassin' to electrical engineer 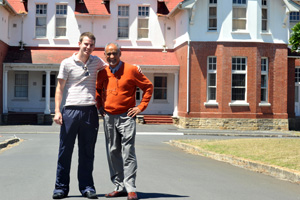 Against all odds: Luke Warner, who grew up at the Marsh Memorial Home, overcame considerable obstacles to obtain his honours in electrical engineering. Here he is congratulated by the home's principal, Steven Noorman.

Luke Warner's story is one of inspiration and encouragement.

From the age of seven Warner lived in the Marsh Memorial Home, a safe haven for children at risk. He matriculated from Pinelands High and initially wanted to be an assassin because it seemed "like a cool job".

In his first year, he not only struggled academically, but also had to work up to six nights a week to pay for his accommodation, transport and food. In his second year he secured a place in Smuts Hall residence.

Despite the considerable demands of his engineering degree, Warner served in leadership positions in his department. He also mentored first-year electrical engineering students and served as a mentor in his res.

During the mid-year break in 2012, he worked as a resident teaching advisor on the LEAD Global programme, which exposes a group of diverse, high-achieving high school pupils from the US and the Western Cape to the fields of engineering.

"Find your purposes so you know where you are going," is the mantra he lives by. "Be humble and willing to know you make mistakes. Be generous - share your resources, your time and your education without expecting anything back."

Next year Warner will join Standard Bank in Johannesburg as a corporate and investment graduate.