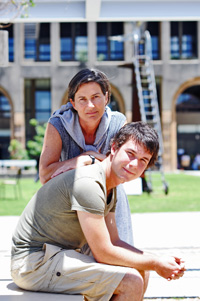 Dean of the faculty of law Prof 'PJ' Schwikkard, and son David Jeffery.

It often happens that children are not interested in following their parents' career paths.

David Jeffery is no exception.

Both his parents have law degrees, with his mother, Professor Pamela 'PJ' Schwikkard, holding the most senior law position at UCT as the Dean of the Faculty of Law.

Instead, Jeffery chose politics, philosophy and economics over jurisprudence and moot courts.

Luckily mom's not holding a grudge. On 15 December, Schwikkard will hood Jeffery when he steps up to the graduating podium to receive his BSocSc, with distinction.

"He did not want to study law - both his parents have law degrees and I think that was a deterrent," says Schwikkard.

But the family respected his decision, and the effort he's put into his studies.

"He has made full use of the past three years, and we are extremely proud of him."