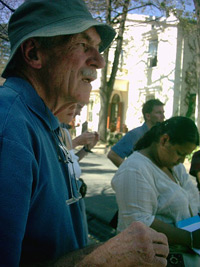 Guide: The late Emer Prof Ron Davies leads another of his much-beloved excursions.

The Department of Environmental & Geographical Science mourns the loss of Emeritus Professor Ronald John Davies, who died on 13 September, aged 81.

Born in Pretoria, Davies graduated from Rhodes University with an MSc in 1954. Completing his PhD at the London School of Economics in 1961, he taught in the Durban division of the University of Natal until 1975, when he moved to Cape Town as head of geography.

Despite taking early retirement in December 1993, Davies continued to be very active in UCT's Department of Environmental and Geographical Science (EGS) and the geographical and urban studies communities.

In one tribute, Wayne Davies, emeritus professor of geography at the University of Calgary in Canada and a member of the IGU, hailed the late UCT scholar for his contributions to the study of geography both in South Africa and in the rest of the world, and especially his memorable informal excursions into whichever city the IGU was meeting in. "He was one of the most distinguished geographers of his generation in South Africa," wrote Davies.

Added Professor Geetha Anant of the Centre for Indian Ocean Studies at Osmania University in India: "For those who have known him for long years the memories are encyclopaedic, but for us who have but had few interactions the loss is greater for having had few opportunities for greater interactions and learning experiences."

Most recently, Davies spoke at the 9th Biannual Society of South African Geographers (SSAG) Conference, held at UCT on 21 to 22 June 2012, delivering a speech to celebrate 75 years of geography studies at UCT. A few days earlier, he had led another of his famous excursions, this one around central Cape Town, as part of the programme of the SSAG Student Conference.