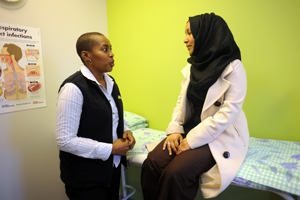 Scaling the peaks of a top-class education at an institution such as UCT comes at a price, and the daily avalanche of deadlines and other pressures swamps many an aspirant scholar.

Now, the wounded and weary can tend to their ails on the doorstep of the lecture halls and tutorial rooms of upper campus. The official opening of the new UCT Upper Campus Clinic on 18 September drew a collective sigh of relief from students, some of whom have grown reluctant to brave the walk down to the Student Wellness Service headquarters in Rhodes Avenue with sprained ankles or bruised psyches.

Students can find the upper campus oasis, organised by the Student Wellness Service, the Department of Student Affairs (DSA) and the Students' Representative Council (SRC), on level 6 of the Steve Biko Building. The clinic is staffed by a nurse and two psychologists to help students negotiate the numerous stresses that pothole the path to success.

All services are offered on a walk-in basis, although the psychologists are also available for pre-booked consultation sessions.

Deputy vice-chancellor Professor Crain Soudien expressed a "big" thank you to those who worked to launch the clinic.

"It's really a gratifying moment for me that we've gotten to this point."

DSA executive director Moonira Khan, reminded those at the launch that the clinic was simply an 18-month-long pilot programme, after which the situation would be assessed. SRC health and safety co-ordinator, Samanthaclaire Ncube, used this fact to urge students to use the facility.

The clinic has been operating since 1 August and is open daily from 08h30 until 16h30 during term time.