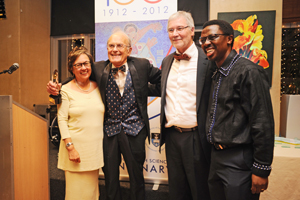 Writing records: Prof Lionel Opie (second from left), here with Prof Marian Jacobs, deputy vice-chancellor Prof Danie Visser and Prof Bongani Mayosi, was among the researchers honoured by the Department of Medicine for their publishing achievements.

Publishing typically comes at the end of a very long to-do list for those lecturers-cum-clinicians-cum-researchers in UCT's Department of Medicine.

When they do publish, however, they do pretty well, as witnessed when the department honoured 39 researchers who have made "seminal contributions to medical science through their publications" at a dinner at the Cape Town International Convention Centre on 25 February. The number 100 was a recurring theme on the evening - the event kicked off the Faculty of Health Sciences' Centenary celebrations, and the department had elected to celebrate papers that have been cited at least 100 times.

They were surprised to find out that no fewer than 39 researchers had hit this "classic" mark with at least one paper, reported head of department, Professor Bongani Mayosi.

"This concentration of high achievers in one medical department is unprecedented on the African continent," he said.

More than that, many of the 39 had published two or more papers to reach the standard-bearing century. And some papers had been cited a couple of hundred times - one by Professor Eric Bateman of the department's Division of Pulmonology over a thousand times, for example.

But the star of the evening was 79-year-old Professor Lionel Opie, co-director of UCT's Hatter Cardiovascular Research Institute, who received a very special version - code for 'bigger' - of the award presented to other researchers. By one count, Opie has published 534 scientific articles, 31 books on heart disease and 141 contributions to other books.

And no fewer than 52 of his articles have been cited at least 100 times.

The trick is to generate the next generation of Opies, said the dean, Professor Marian Jacobs. The faculty takes the research endeavour very seriously, she explained, and has put in place a number of measures to encourage research and publishing across the board, from including a compulsory research project in the undergraduate curricula to setting up fellowships and research sabbaticals for senior academics.

It's not just an exercise in vanity, either, said Jacobs.

"Our research is not simply intended to generate knowledge for knowledge's sake, but rather and particularly to improve the lives of these we serve."