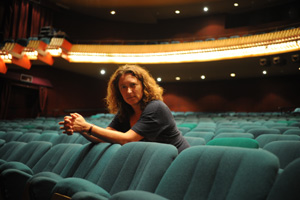 Action: Lara Foot is in the running for no fewer than six Fleur du Cap Theatre Awards.

If you're talking who's who in South African stage circles, Lara Foot's name is sure to come up again and again. It came up no fewer than six times, in fact, among the nominations for the 47th Fleur du Cap Theatre Awards.

Foot, CEO and director of the Baxter Theatre Centre, scooped the half dozen nominations - out of 17 categories - for her 2011 Solomon & Marion, a play that also marked Dame Janet Suzman's first return to the South African stage in 35 years.

Foot's not new to the Fleur du Cap - she won her first in 1992 as outstanding young director. In 2003, she topped the best new South African play category for Tshepang, and in 2011 was named best director for Woyzeck.

The Fleur du Cap Theatre Awards will be presented at the Baxter Theatre Centre on 18 March.