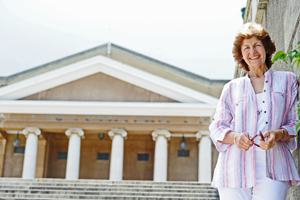 Honouree: Black Sash stalwart Di Oliver, rewarded for her activism and work towards justice and peace.

Long-serving Black Sash stalwart Di Oliver is to be honoured for her role in advancing peace and justice in South Africa by becoming the first recipient of UCT's Chancellor's Medal on 12 December.

The award was instituted by the University Council in 2007 to honour those who have "made a significant contribution to a common good".

In a letter to Oliver, inviting her to accept the award, vice-chancellor Dr Max Price said: "Your record of having profoundly impacted the lives of many, and no doubt continuing to do so, is remarkable."

Oliver (née Bishop) was a member of the Black Sash from 1978 until membership closed in 1995. She has been a trustee of the Black Sash Trust since then, serving as its chairperson between 2005 and 2006. She is a board member of a number of NGOs and an active parishioner at St George's Cathedral, where she is a lay minister and the co-ordinator at Caritas (the Cathedral's caring ministries) and the Cathedral Justice and Reconciliation group.

In an interview with Monday Paper, Oliver said she was thrilled with the award.

"I was completely taken by surprise. I hold UCT in such high regard," she said.

"I consider it an honour and a great recognition of the importance of civil society activism in our country. The work I have done has formed me. It is a reciprocal thing."

Oliver said she had never sought recognition for her work.

"I worked as a social worker, then became very political because I became deeply involved in anti-apartheid work."

She added: "This award comes at a time when there is a great deal of questioning about the activism needed in civil society, after what appears to be a new wave of oppression arising."

"Just wanting to contribute to making the world a more just, caring and less harsh place."