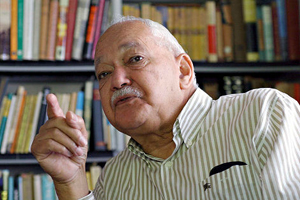 Whether in education or the media, civil society or politics, historian Professor Richard 'Dick' van der Ross has played a crucial role in improving South Africa since he graduated from UCT in 1940.

Now his alma mater will honour him with the President of Convocation Medal at a graduation ceremony on Saturday 17 December. The medal is awarded annually, to UCT graduates who have brought credit to the university through their contributions to the wider community.

"The Convocation of UCT must be one of the most prestigious bodies in the country, and it's an honour to be awarded by them," Van der Ross commented on the award.

But to enrol at UCT in the late 1930s, Van der Ross said, was in itself an achievement for a black person.

"I followed my father, who in 1925 was only the third member of my community to graduate with a BA at UCT."

At UCT, Van der Ross obtained a primary and secondary teacher's diploma, as well as a master's degree and a PhD in philosophy. For many years he worked as a teacher and as a principal at Cape Town schools, and edited what was then the Cape Herald newspaper, before he was named the first black principal and vice-chancellor of the University of the Western Cape in 1975, a post which he occupied until 1986.

Van der Ross, who penned a number of books and articles, was among the first three members of the former Democratic Party to serve in the Western Cape Legislature in 1994, before he was appointed ambassador to Spain and Andorra.

Now, at 90, he writes a bit and still works to improve other people's lives.

"I always remember that if I have been able to be of service to others, it has been in no small measure due to my association with the University of Cape Town."