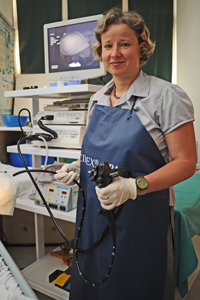 First up: Dr Gisela Wenzel Smith will be the first to graduate from the Division of Family Medicine's new registrar programme in family medicine.

Dr Gisela Wenzel Smith's graduation this week will mark a milestone moment for the Division of Family Medicine at UCT.

Smith will become the first to graduate from the division's new registrar programme in family medicine.

The Division of Family Medicine started the four-year programme in 2007, after family medicine was promulgated as a new speciality.

The programme trains family physicians, who have a vital role to play in the care of patients and communities at a district level.

As part of their training, doctors rotate and gain skills in a variety of specialist disciplines relevant to care at the district level. Emphasis is placed on comprehensive health care using a patient-centred, bio-psychosocial approach.

Interest in the course is picking up, Smith said. This year there are six registrars in her year (including herself), five in the second, and eight in the first year of the programme. In 2012 nine new registrars will start their training.

Smith's research showed that appropriately trained generalist doctors can give safe analgaesia and sedation to allow minor procedures to be performed painlessly on patients at a district hospital.

The medical graduate from Aachen, Germany, spent part of her sixth year of medicine as a student intern in Cape Town in 1995. It was here she met husband Peter.

Unable to register her medical qualifications in South Africa, the couple moved to the UK, where Smith spent three years in a vocational training scheme, which trains doctors for general practice.

Two children later, in 2003, they moved back to South Africa, where Smith worked as a principal medical officer in district hospitals in KwaZulu-Natal and in the Western Cape.

"In 2009, as I approached 40, I decided to formalise my South African learning experience and specialise in family medicine. UCT exempted me from two years of training because of my prior experience and my UK qualification," Smith said.

For Smith - who sees "patients as people and not as diseases", and who believes health is closely linked to social inequality - family medicine was a "natural choice".

"Having family medicine registered as a speciality is a hugely exciting development. I thoroughly enjoyed the course."