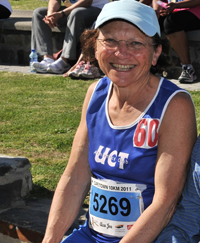 Some retirees never lose their UCT ties. Or, in the case of Rosalie Richfield, their UCT running vests. And a good thing, too.

It was while donning UCT colours that Richfield, of the Graduate School of Humanities until her retirement earlier this year, took first place in the 60-64 age category at the Western Province Cross Country Championships.

That led to a spot in the Western Province side that travelled to the South African Cross Country Championships in Bloemfontein in September, where she ran in the master's race, which also featured one Zola Budd.

This time, Richfield won silver in the 60-64 category.

"I told my colleagues, very tongue in cheek, mind you, that I was retiring in order to have more time to run," jokes Richfield. "And see, it paid off."