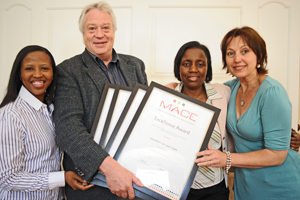 UCT won four awards for outstanding performance at the Marketing, Advancement & Communications in Education (MACE) Excellence Awards, presented at a gala dinner in Johannesburg in October.

The awards ceremony was the highlight of the two-day MACE conference, attended by marketers and communicators from the country's higher and further education institutions.