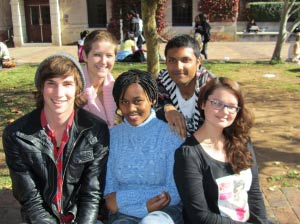 Director's cut: The five winning filmmakers from UCT who will showcase their work at this year's Encounters Film Festival in Cape Town are (from left, back) Frank Stephens and Rustum Jaffer, and (from left, front) Craig Mulligan, Lucy Jacobs and Nadia Horn.

Five student filmmakers have been selected to showcase their short documentaries at the 13th annual Encounters Film Festival, held Cape Town in June.

The films are the result of a semester-long screen production course at UCT's Centre for Film and Media Studies, supervised by visiting documentarian and film director Paul Yule.

"The standard of the films has been excellent," says Yule, "and it has got better and better as each round of films have been made."

Yule's approach is to expose students to the full spectrum of film production, from conceptualising through to the premiere screening. Dividing the 25 third-years into small groups, Yule asked them to direct a short documentary on a subject of their choice.

As well as screening the finished product in front of a critical audience - an event dubbed The Big Picture Film Festival - students also have to face a question-and-answer session.

"It's been amazing just how much we have all learnt and grown as aspiring filmmakers, without actually realising it," says Frank Stephens, director of the 10-minute Cannabis Culture, one of the films to be screened at Encounters.

"Paul has been a fantastic mentor," says Nadia Horn, director of Hier's Ek Ook /Here I Am Too. "He has gone the extra mile by exposing us to industry opportunities. We did not even know that our films would be submitted to Encounters so it was a really amazing moment when we heard that our films would be sharing the stage with some of the best material on the continent."

Also selected for the documentary film festival are Rustum Jaffer's Riders of the Night, Craig Mulligan's Endless Bummer, and Lucy Jacobs' In Repair.

The Encounters Film Festival will be held from 9 to 26 June.