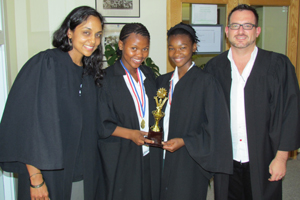 High school learners from the Western and Northern Cape provinces tested their legal skills when they took part in the recent Regional Mini-Moot Court Competition, organised by the UCT's Faculty of Law and the University of the Western Cape's Legal Aid Clinic.

In view of the audience, which included the Minister of Basic Education, Angie Motshekga, and representatives from the Western Cape, Northern Cape and KwaZulu-Natal Departments of Education, the Grade 11 and 12 learners argued both as applicants and respondents on Constitutional matters that affect them and the community. Arguments centred on corporal punishment, rights to education and dignity, said organisers Democratic Governance and Rights Unit (DGRU).

The DGRU said the aim of the regional competition was to give learners an opportunity to learn and practise legal advocacy skills and construct arguments.

The competition was won by the team of Palesa Hoye and Sibabalwe Galitshana of Kimberly Girls' High.

The learners were also addressed by the UCT Jessup Moot Team that will represent South Africa in the Jessup International Law Moot Court Competition in Washington later this year.

The regional competition helped the learners to prepare for the inaugural annual National Schools Moot Court Competition in Johannesburg and Pretoria from 18 to 21 March. UCT law students have visited schools in the Western and Northern Cape provinces, teaching learners about the Constitution and the context of the facts of the cases they were given for that competition.