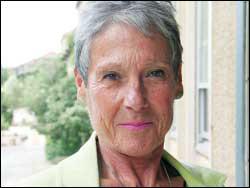 UCT is saddened by the death of Professor Nelia (Cornelia) Saxby (BA Hons, MPhil (Lond), PhD (UCT) of the Italian Section of the School of Languages and Literatures, after a protracted illness.

Saxby was born in Alexandria, Egypt, on 6 January 1945. She joined UCT in 1969 and was responsible for the establishment of Italian studies at UCT in 1970, elevating the study to full undergraduate and postgraduate levels. In 2007 she was awarded the Cavaliere nell'ordine della stella di solidarietà italiana (Knight of the Order of the Star of Italian Solidarity) in recognition of her contribution to the diffusion of Italian culture in South Africa and as a philologist.

The star is awarded to Italians and non-Italians for their support and contribution to Italian culture. The Italian embassy in South Africa made the nomination.

Saxby's mother was Greek and her father Italian, but she grew up in Kenya and Zimbabwe. She moved to Cape Town in the late 1960s. Her eclectic origins inspired her passion for philology, which is the study of the grammar, rhetoric, history, literary interpretation and critical traditions of a given language. Saxby authored several books, including her magnum opus, the 1997 Rime di Francesco Palmario di Ancona, the richest collection of verse to have been composed in honour of Sigismond Malatesta and his mistress.

Saxby was a founder member of the Association of Italian Professors and a regular contributor to Italian Studies in Southern Africa. She was due to retire at the end of this year.

She is survived by two children and three grandchildren.