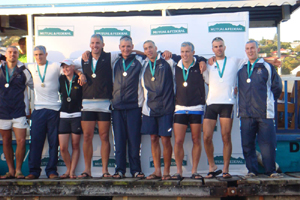 "Definitely no records were set this time round," said Sean Kerr, a trustee of university rowing, as weather conditions in the Eastern Cape made for a very difficult race, with rain on Friday and strong headwinds blowing up the Kowie River over the finals on Saturday.

Kerr noted that this year's winners were among the favourites, so there were no surprises in this regard. "However, a notable achievement was that University of Cape Town got into the Men's final race."

The UCT women, too, had reason to celebrate their performance. "I think it is important to note that two years ago we were struggling to put a ladies' eight on the water, and this year we have three crews for the women, as well as three crews for the men,' said the club's Jane Passmore. "This is surely due in part to the strong coaching that the teams are now receiving, and the revived spirit in the club."