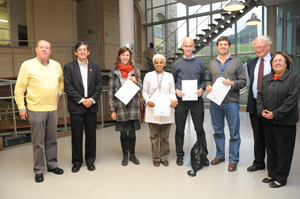 Young medical researchers were honoured for their outstanding output at the first Best Publication Awards held by UCT's School of Medicine on 26 July.

Opening the ceremony, deputy dean Emeritus Professor Greg Hussey said that he hoped the awards would become a regular event, and would encourage and retain young researchers at the faculty.

"We have many researchers out there, but we don't always know what they're doing," said Hussey. "We need to develop strategies to recognise their work, and keep them with us."

Guest speaker at the event was former UCT deputy vice-chancellor Professor Wieland Gevers, who spoke on the need for consilience, meaning the unity of knowledge, in approaching medical research.

"There are almost no new ideas under the sun, so researchers can't be too focused in their readings. They should be more open-minded, and read around their topic to generate new ideas."

"You have no idea what the next ten years will bring, so you should never dwell on the idea that you won't be able to make an enormous contribution to science.

"But," he added, "it's vitally important to remember that great effort is essential in creating new opportunities."

Winner of the public health science category was Rory Leisegang for his paper, Early and late direct costs in a southern African antiretroviral treatment programme: A retrospective cohort analysis.