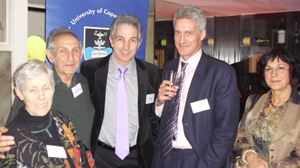 Whoever compiled the whirlwind, two-country, four-city - London, Manchester, Washington, New York - trip for the vice-chancellor, Dr Max Price, at the end of May didn't leave much room for him to catch his breath. Instead, Price had to criss-cross the cities via air, river and rail for a succession of meetings, functions, talks and conferences.

The occasion was the VC's annual - or, sometimes, twice a year - alumni visits and fundraising expedition in the UK and the US. His seven-day stopover in London, for example, was crammed wall to wall with meetings with established and prospective donors and funders, some influential UCT graduates among them. (He was joined on most of these gatherings by former vice-chancellor Dr Stuart Saunders and Angela Ross of the University of Cape Town Trust [UK], the registered UK charity that raises funds for UCT there.)

Tucked in between these were a meeting with the charity's board of trustees, as well as a couple of get-togethers with alumni and 'friends of the university' in both London and, in a first for the university, Manchester. These events included a trip on the Thames Clipper to the Old Royal Naval College, where Price and Professor Walter Baets, director of the Graduate School of Business, teamed up to address alumni and other guests.

The aim of the trip, says Price, was firstly to maintain contact with and the enthusiasm of alumni, keen to keep abreast of the goings on at their alma mater and in South Africa. Ditto for the meetings with donors, some with whom Price negotiated the rollover of grants, others with whom he had to broach new projects.

"Maintaining the relationship with funders is absolutely critical even in periods when, due to the wider financial environment, they are unable to give," he says.

Price then crossed the Atlantic for New York in the US where, after touching base with Holly Lawrence who works for the UCT Fund, Inc, which mirrors the fundraising work of the London trust, Price met up with a number of donors, including four new prospects, ie organisations that have not previously supported UCT.

From New York it was a hop, skip and a jump to Washington, this time for the annual general meeting and conference and of the Worldwide Universities Network (WUN), which UCT joined in late 2009. UCT is the only African university in the network.

The VC was not the only UCT delegate at the conference. Also there were deputy vice-chancellor Professor Jo Beall, who had negotiated UCT's place on the network; and Dr Loveness Kaunda and Lara Hoffenberg of the International Academic Programmes Office, in the US for another conference later that week of the National Association of Foreign Student Advisers (NAFSA): Association of International Educators, and visits to three partner universities.

WUN was chosen because it focuses on international collaborations in research and graduate education. For Price, one of the highlights of the WUN conference, which explored collaborations in key areas such as climate change and global public health, was the paper that showed that the increase of research papers published jointly by WUN collaborators exceeded the increase in research papers published by individual universities.

"The conclusion of the paper is that there is indeed significant benefit in research productivity from the collaboration and from investing in this particular network," says Price.

Is there a link between the WUN meeting and fundraising?

"We've ended up over the years working with a subset of donors whose focus is on excellence, and who believe that South Africa and the continent need a handful of truly world-class universities," says Price. "They recognise the value of that for economic development, and for reproducing the academic profession of the country and of the rest of the continent."

And going by the successes of the trip, many are matching that recognition with their cheque books.