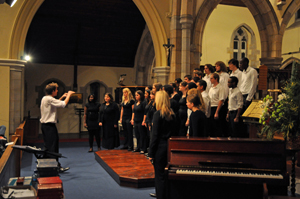 In concert: John Woodland conducting the UCT choir, which celebrates its 25th anniversary this year, at St Paul's in Rondebosch.

The UCT Choir celebrates its 25th anniversary in style this year, hosting a special concert and releasing a new CD.

The concert will take place on 20 October at the Jameson Hall, and the choir will perform a rich variety of a cappella works from early classical to contemporary genres, both sacred and secular. The CD is set to be released next month.

Under the guidance of final-year BSc student John Woodland, a presenter on Fine Music Radio 101.3 since 2006, the 40-member choir is a diverse musical group, and welcomes local and international students from all faculties, as well as alumni and the general public.

The choir has toured extensively around the country and has participated in countless events, including, this year, the Last Night of the Proms charity concerts in the Cape Town City Hall, a winter concert at St Paul's Church in Rondebosch, and a traditional choral service at St George's Cathedral.