UCT evenings get parents on board 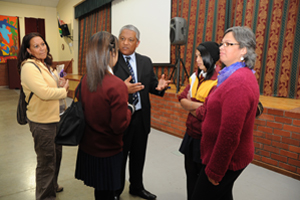 The newly introduced National Benchmark Test, financial aid and the extended curriculum programme were the main issues raised when the Admissions Office hosted the first of its four planned local UCT Afternoons and Evenings for the year.

Seven schools took part in the event at South Peninsula High School on 19 July, which saw parents and learners from Diep River and the surrounding areas engaging with staff from the office, faculties and sections involved in the admissions process.

Iegsaan Isaacs, student recruitment manager, noted that the annual programme was started some six years ago in keeping with the university's desire to remain accessible to communities. Although the office had been interacting with learners before, it was realised that parents were not up to date with developments at UCT and were removed from the application process.

The events take place in the afternoons or in the evenings, depending on the needs of a particular community, at different schools.

"Some parents told us that they had thought that financial aid was not for them," Tsotsobe explained. "After the event, they displayed enthusiasm and are clear of their roles."