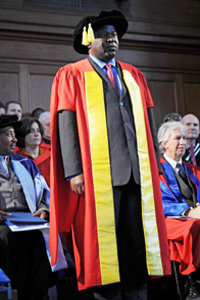 Former Reserve Bank Governor Tito Mboweni's (left) "superb management" of South African monetary policy earned him the respect of not only the banking industry but also of the UCT community, who awarded him an honorary doctorate in economic science (DEconSc) on 3 June.

Professor Alison Lewis, who made her debut as UCT orator (taking over the reins from Emeritus Professor Francis Wilson), noted that Mboweni demonstrated steadiness, flexibility and focus over his tenure - essential qualities for his duties as the Minister of Labour (from 1994 to 1999), and as the Governor of the Reserve Bank.

UCT hosted two graduation ceremonies on Friday. At 10h00, the faculties of Engineering & Built Environment, Health Sciences and Humanities capped their cohorts, while the Graduate School of Business had the 15h00 ceremony all to itself.