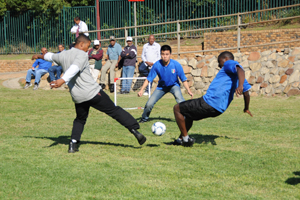 Battling it out: Teams from different laboratories at the Medical School competed against one another in the annual PGSA mini-soccer tournament.

Laboratories at the medical school tussled with one another - thankfully not in the lab, but on the field of play - on 21 May when the Faculty of Health Sciences' Postgraduate Students' Association (PGSA) hosted its annual mini-soccer tournament.

The four-a-side competition saw 12 teams, representing different laboratories, bring together students, supervisors and administrative staff on social terms. "People often interact with one another only at an academic level, and we wanted to use this event to bridge that communication gap," explains Alexis Bick, a PGSA committee member.

The event was also a fundraising initiative for the student body (each team paid a R40 affiliation fee) and a celebration of the upcoming 2010 FIFA Soccer World Cup. The team from the Human Genetics laboratory won the tournament, taking away a floating trophy similar to the World Cup (if a more cut-prize version), medals and the spirit prize for having the best supporters.