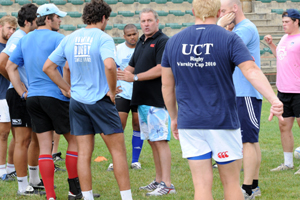 Big guns: UCT has called on the likes of Stormers and Springboks assistant coach Gary Gold to prep the squad for the Varsity Cup.

After two promising campaigns, the UCT rugby first team is upbeat about its chances in the upcoming FNB Varsity Cup, which kicks off on Monday, 1 February, with the side playing Free State University's Shimlas in Port Elizabeth in the first of the four games on the day.

And with four months of preparation under their belt - training started way back in October last year - the team has cause for confidence. Their last pre-Cup game, a narrow 12-14 defeat to provincial outfit Boland on 25 January, was further evidence that the side is all set for the marquee event that the Varsity Cup has become.

"I had a good look at all the players available to me and from that point of view I was very satisfied," coach John Dobson said in an interview after the match.

If UCT accepted their status as rank outsider when the competition was launched in 2008 - they almost didn't get in - they quickly set the record straight, ending up as losing finalists in 2008, but bagging the award for the team that played "rugby that rocks", the Varsity Cup motto. To prove that they were no flash in the pan, the Ikey Tigers made it into the semi-finals again in 2009, a dropped pass eventually denying them a spot in the final (and a guaranteed R150 000 in prize money).

But now there's a monkey to get off its back. And 2010 is the year in which the side has set its sights firmly on that trophy, in keeping with its three-year plan to become competitive in the event.

"The truth is that we've exceeded that ambition by quite a bit because we were competitive from the very first game," says Dobson. "But if we don't win this year, I would regard it as a disappointment." 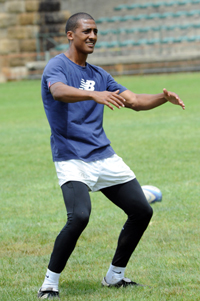 Into the rhythm: Marcel Brachie (left) shows the kind of form that he hopes will earn UCT a sought-after title win.

The 2010 squad is also a promising brew of experience and youth, and Dobson's team for the opening game is packed with players who are now into their third Varsity Cup. This includes the likes of former captain JJ Gagiano, Therlow Pietersen, Marcello Sampson, Matt Rosslee, Stu Commins and Martin Muller, who by now shouldn't be ruffled by either the cameras or the screaming fans.

And on the bench are newcomers of the ilk of loose forward Yaya Hartzenberg and lock Levi Odendaal, who've represented the Western Province and Lions under-21s, respectively. Hartzenberg, Muller and Tim Whitehead have also been part of the Stormers set-up, and add further muscle to the line-up.

Also joining the squad are a couple of players groomed in the under-21 league, and one or two - like centre Marcel Brachie - who've cut their teeth in the internal league.

"With the good mix of experience and youth that we have, it brings a great balance to our squad," says Nick Fenton-Wells, who will share the captain's arm-band with Commins this year.

UCT is yet to win its opening Varsity Cup game, so a defeat to Shimlas won't be the end of their tournament ambitions, as they've shown over the past two years. That said, the seven other teams will be looking to jack up their performances as well, so a victory would be a good way for the Tigers to get out of the blocks.