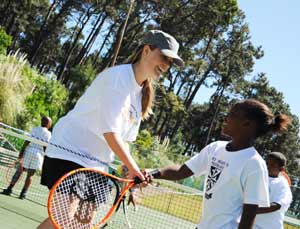 Over 150 children from three schools in the City Bowl spent the morning of 29 October on UCT's tennis courts, thanks to an initiative by the Tennis Club and the Growing Sport Foundation Trust.

This was the first of what is hoped will be many big tennis days for the children, which included training by UCT coaches, prizes and the opportunity to watch experienced Western Province players compete.

The collaborative effort to teach the joys of tennis to children who come from schools with little or no sporting facilities came about when fourth-year fine art student and development and transformation head for the UCT Tennis Club Jessica Ellis contacted the foundation in 2008.

This resulted in a team-up with Michelle Whitehead, head of the foundation's Growing Tennis Programme and a well-known figure in South African tennis.

Acting as assistant coaches, UCT students picked up the basics of Whitehead's Play & Stay programme, accredited by the International Tennis Federation - enough to run the classes themselves. Now, at more than 15 sessions over a seven-day week, Ellis and a band of club mates host training sessions with what adds up to hundreds of school learners at seven primary and high schools in the Cape Town City Bowl.

Those interested in getting involved in the 2010 program can email the Tennis Club.