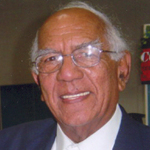 At a small ceremony this week, Vice-Chancellor Dr Max Price presented Richard Dudley, an educationalist whose involvement with the Teacher's League of South Africa over the apartheid years galled both the authorities and his immediate supervisors, with an honorary doctorate in education.

An alumnus of UCT, Dudley's teaching career at Livingstone High in Cape Town over 39 years is widely recognised as the foundation upon which hundreds of former pupils built success in a wide range of professional and academic fields, here and internationally.

By providing an alternative to the curricula of the Coloured Affairs Department, Dudley and his colleagues went well beyond what was required by the syllabus. It was this philosophy that ensured that Dudley never became principal, even though he was eminently qualified for the job.

He was banned in 1961, along with 200 other teachers, but was allowed to continue teaching.

Dudley was the primary force behind Livingstone High becoming one of the foremost high schools in the city and country and, significantly, one of the most important feeder schools to UCT. In fact, in the 1980s two Teacher's League schools, Harold Cressy and Livingstone, ranked tenth and eleventh among UCT's feeder schools, ahead of many of the "elite white schools in the city", recorded Peter Kallaway in The History of Education Under Apartheid, 1948-1994.

"Richard Dudley has given his life to teaching and politics, and affected and influenced thousands of people who continue to work for democracy in South Africa and abroad," noted Alan Wieder in his 2008 biography on Dudley, Teacher and Comrade: Richard Dudley and the Fight for Democracy in South Africa. "Whether it was students, comrades, or opposition, life was always teaching and relational for Dudley," reads the blurb on the volume.

On 7 April, Price and other members of the university's executive met with Dudley, in poor health at the moment, and his family and friends to present him with his doctorate.