Vice-Chancellor and Principal, Prof Njabulo S Ndebele, and the president of the University of Michigan, Mary Sue Coleman, have signed a renewal of their student exchange agreement, further cementing the close links between the institutions.

Prior to the signing, Coleman delivered the Vice-Chancellor's Open Lecture on the expanding role of universities in a shrinking world, underlining links between the two universities.

"There has never been a greater time for higher education to seek out new knowledge in new communities, because whether we are based in Cape Town or Ann Arbor, we share the language of ideas," she said.

Her university has been developing partnerships around the world for a long time, starting in 1880 when university president James Angell visited China.

"Here in South Africa our university's engagement began in 1987, with the awarding of an honorary PhD, in absentia, to Nelson Mandela, who was then confined to Robben Island."

Among the shared projects is a three-year training programme in quantitative social science and a joint economic demography programme, the latter complemented by a Fogarty Grant in Population Studies and joint teaching at UCT by Jim Levinsohn and Prof Murray Leibbrandt.

"Scholarship knows no borders. By our very nature, universities are at the forefront of globalisation and co-operation." 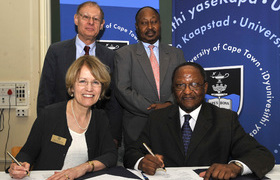 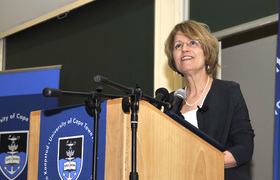