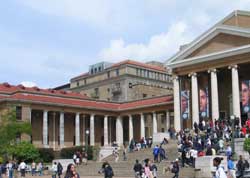 Shortlist: UCT has announced the shortlist for the new vice-chancellor position

The three short-listed candidates for the University of Cape Town's vice-chancellor position have been announced by the Chair of Council, Mr Geoff Budlender. They are Professor Cheryl de la Rey, Professor Martin Hall, and Dr Max Price.

In a statement circulated to all staff and students on 19 September, Budlender said: "The Selection Committee considered the pool of applicants and interviewed a number of candidates in order to arrive at a final shortlist. The three candidates will now meet with representatives of various sectors of the UCT community, including staff and students."

The Senate will then be invited to express its support for the candidate as required by the agreed procedure, and the Institutional Forum will be invited to verify that the appropriate process has been properly followed. The nominee will then be presented to the Council for consideration for appointment.

It is hoped that the process will be completed in October.

Click here for the statement from the Chair of Council as well as to download the CVs of the three shortlisted candidates.