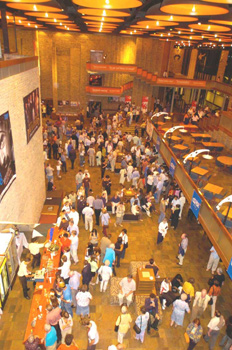 Happy Baxter-day: The Baxter Theatre Centre, an icon and landmark in Cape Town, turned 30 on 1 August.

On 1 August, the Baxter Theatre Centre celebrated its 30th anniversary.

The dream of the theatre was first revealed in the will of the late Dr William Duncan Baxter in 1960, one that stipulated: "For all the people of Cape Town … utilise this bequest for the purpose of developing and cultivating the arts. This could, I am satisfied, best be done by establishing a theatre in Cape Town in which plays, operas, ballets, concerts and other forms of entertainment can be given."

The theatre first opened its doors on 1 August 1977.

Throughout the years of apartheid, the Baxter Theatre Centre remained open to everyone, thriving by drawing on indigenous talent and creating a uniquely South African theatre.

It continues to present cutting-edge, contemporary and classic works and masterpieces from the local and international repertoires. Top directors work with a host of well-known and respected theatre, television and film actors to ensure an exciting and diverse line-up all year round.

Firmly rooted as a landmark in the student suburb of Rondebosch, it holds many memories for more than eight million visitors who have attended shows over the years, making it one of the busiest independent theatres in Africa.