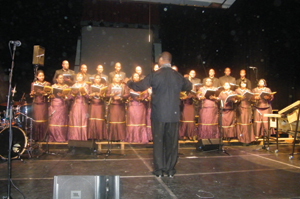 Having started the Voices of Cape Town and Ingoma Music Ministries projects in 2001 and 2005, their performance during the festival was a milestone.

Jacobs (Development and Alumni Department) was invited by the Festival Committee to prepare a piece that would pay tribute to African composer Michael Moerane, the first black music graduate of a South African university.

The group explored Moerane's harmonic dynamics in musical pieces such as Alina and Morena Tlake. The performance was accompanied by a three-piece jazz band, a contrast to Moerena's classical background.

"Though it was not my first time performing at the festival, this year was very different. It was exciting - very tough because of scheduling performances - but a life changing experience," said Jacobs.

Jacobs started his musical career as a singer before branching into choir training and composing. He was part of the UCT Choir for Africa in 1991.