Law dean 18-millionth of a kind 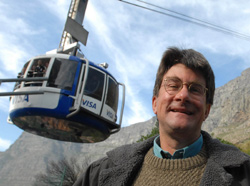 When Professor Hugh Corder, dean of the Faculty of Law, saw journalists and balloons in front of the Table Mountain's lower cable-car station, he thought some famous celebrity was visiting.

Minutes later he turned out to be the celebrity -staff at the station told him that he was 18-millionth person to go up this popular tourism destination with the cable car, and cameras flashed his way.

For the distinction, Corder was given a certificate, a sweater, a cap and a hamper with chocolates. He was also handed a bottle of wine and tickets for a meal in the restaurant on top of the mountain.

The "very funny" experience took place on 13 July when Corder took his family of two adults and four children out for a walk on the mountain.

When they arrived at the cable station, there was a winding queue and lots of tourist buses.

"There were also several staff members of the cable car company chatting to people and we wondered what they were doing," says Corder.

When his turn came to buy tickets, the public relations manager took him to aside and told him the good news.

As Corder's entire family was the '18-millionth visitor', all got a free ride up the mountain.

"It was a lucky thing to happen and we are very grateful."