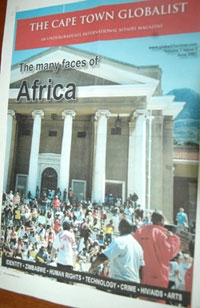 Global appeal: The third issue of UCT's The Cape Town Globalist was released on 25 May.

The third issue of UCT's The Cape Town Globalist, a student-run international affairs magazine, hit the stands on Friday, 25 May.

The Cape Town Globalist, hosted by the Centre for Film and Media Studies, is the twelfth chapter at prominent universities around the world, including the likes of Yale University, University of Cambridge and Peking University.

Launched in 2000, The Globalist Foundation (now called Global21) at Yale University invited UCT students to be the first African chapter in 2006. The first issue of The Cape Town Globalist was released in June 2006. It appears once a semester.

The magazine aims to heighten awareness of international affairs, particularly South Africa's relationship with the rest of the world. This semester's Cape Town Globalist theme, The Many Faces of Africa, includes reports on the Bushmen in Botswana, the new national HIV/AIDS strategic plan and an in-depth look at crime in South Africa.

Global21 targets select university students around the globe to bolster dialogue between talented students who will go on to become future leaders in their fields. By 2010 it aims to have 14 chapters on six continents reaching 245 000 students in seven languages.

'As future leaders and policy-makers it is our responsibility to confront issues that threaten our society,' said Megan Dick, the UCT editor.