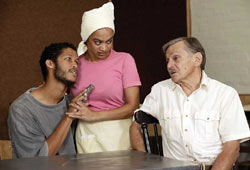 In action: Wayne van Rooyen, Ameera Patel and Cobus Rossouw in Victory, on at the Baxter from 12 April.

Athol Fugard's love for the Karoo continues in his latest play, Victory, which made its premiere at the Klein Karoo National Arts Festival recently.

The play, which runs at the Baxter Theatre from 12 April to 19 May, and later moves to the Market Theatre in Johannesburg, examines the realities of a world robbed of hope and at the mercy of violence and drug abuse. In this "dark and insightful drama", the characters - played by Cobus Rossouw, Ameera Patel and Wayne van Rooyen - investigate the unfulfilled promises made by the wealthy and white, and the subsequent desperation and disappointment experienced by South Africa's youth.

Patel, as Vicky Klaas, is a teenager reeling from her mother's death and her father's alcoholism. Led astray by her thug boyfriend, Freddie Blom, played by Van Rooyen, they embark on a wild spree of burglary and vandalism at the home of Lionel Benson (Rossouw), employer and friend of Vicky's late mother.

Freddie, full of drink, dagga and resentment, blames his situation on the world, particular the whites. He joins a gang to make him the hero.