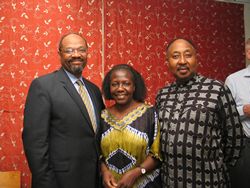 The American ambassador to South Africa, Eric Bost, took it on the chin when he met students and staff at All Africa House on Thursday, 22 February. The topic under (often heated) discussion was: The United States - South Africa Relations.

The evening was hosted by Professor Chuma Himonga, warden of All Africa House, and Bost was introduced by Deputy Vice-Chancellor Professor Thandabantu Nhlapho.

"The main goal that our Presidency wants to meet is to improve and strengthen the relationship between the United States and South Africa, in order to achieve mutual success," Bost said.

A lively debate followed his presentation, with students asking some hard-hitting questions. The topics ranged from poverty eradication to HIV and AIDS, and specifically how the US was assisting South Africa in this regard.