A family affair with golf 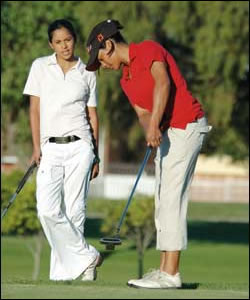 Two can play at that game: Sisters Aneequa and Nuraan Mallick are two of UCT's promising golf stars

It was the golf clubs lying around the family home that sparked Nuraan and Aneeqah Mallick's interest in the sport when they were still very young.

Brother Samier (20) had been playing the game for some time, and his sisters decided to follow in his footsteps around the local courses.

"We had been trying other sports like karate and softball, but we didn't feel that we were going anywhere," explains second-year BCom (information systems) student, Nuraan (21). "So we ended up playing golf."

About three years ago they started formal training at the Rondebosch Golf Club and soon started to play competitively, mainly in league matches. They could only manage about one competition a month "because campus takes up too much time".

But the sisters have done well. Both feature in the Western Province (WP) junior team, as do their younger siblings Wasimah (17) and Rushta (15). (The Mallicks, by the way, are a brood of 10 - all of them golfers, including the two-year-old baby, a young Tiger in the making).

"We are a sporting family and golf is a family talent," says Aneequah (18), who is a first-year mechanical engineering student.

Both Nuraan and Aneequah have been captains of the WP junior team, and have played in the senior women's league.

Recently, Aneequah represented the WP B-side in the senior women's inter-provincial tournament in Germiston, Johannesburg, in which she performed satisfactorily. The WP B-team made the C division, which is the top division for the four-women team event.

So besides their brother, who else are their golfing role models?

The sisters agree that it's Annika Sorenstam (whose first name sounds an awful lot like Aneequah) and Tiger Woods.

But do they see themselves emulating their role models and turning pro in the future?

"It's an option that I'm keeping open at the moment and we will see how it goes," says Nuraan, thoughts of graduation clearly overshadowing any thought of the Women's World Cup.

"My main focus is on my studies for now," adds Aneequah.