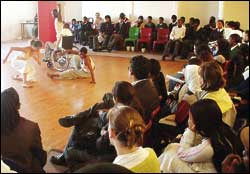 Day off: School kids enjoy a show at the Centre for African Studies.

The Centre for African Studies (CAS), as part of the transformation brief of their cultural programme, hosted 120 grade 11 and 12 learners from 13 different high schools in the CAS gallery.

With the theme What can the humanities do for me? the workshop aimed to introduce potential students, who would otherwise not have any experience of the university, to UCT and the advantages of studying in the humanities.

Those familiar with UCT, in particular students who have had a parent or sibling who has studied here, can underestimate the university's apparent lack of accessibility for many Capetonians, which is what prompted this event.

One Khayelitsha learner commented that what he enjoyed most about the day was the chance "to come to UCT for the first time ever".

The learners came from as far afield as Delft, Phillippi, Khayelitsha, Wynberg, Mitchell's Plain and Athlone, as well as from nearer schools in Mowbray and Rondebosch East.

They were introduced to humanities subjects by various speakers from the relevant departments, as well as getting general advice on study in the faculty from Jonathan Hoffenberg in Humanities Recruitment.

The event was rounded off by a performance by the Centre for African Studies' company-in-residence, Remix Dance Company, which pioneers integrated dance in South Africa, incorporating people with different physical abilities.

Their performance of the critically-acclaimed piece Second Time Broken, featuring four of the company's members, went down wonderfully with the learners.

Asked for their feedback on the day, the high school students said that they especially appreciated the careers advice (and the food!).

Commenting on the event as a whole, one learner said that, "It helped me to realise where I want to be in the future and not to be afraid of it."