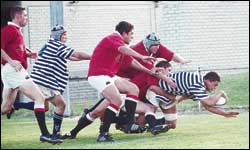 His death came as a shock to all at the UCT Rugby Club: players, coaches, supporters and administrators alike.

Mackie played for the UCT first team in 2004 and 2005, having joined from the Tygerberg RFC, for whom he was playing when the tragic incident happened.

UCT rugby director Spencer King said: "He was one of the stalwarts of the intervarsity team that beat Maties at Stellenbosch in the historic win in 2004. He was a true gentleman, a gentle giant who had a perpetual smile on his face. He had the charming smile and open face that made people warm to him.

"Mackie had a way with people and enjoyed mixing and socialising and making new friends. He was extremely popular both on and off the field and played his rugby with the same exuberance he had for life.

"While he gave no quarter on the field nor asked for any to be given, he played with a hardness and controlled aggression that lifted any pack of forwards to a higher level. He shall be sorely missed as a friend, player, family man, and above all, a wonderful person."