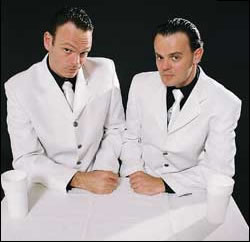 If hilarious, fast-paced, clever satire is your fix, don't miss Ben Vos and John van de Ruit (left and right in picture) in their new production, Black Mamba, at the Baxter Sanlam Studio, running from November 30 until January 14, with a cut-price preview on

The show premiered at the National Arts Festival in Grahamstown and was reported to be the fastest-selling show on the fringe. It follows Green Mamba, the first in the mamba series.

It was co-written by Vos, Van de Ruit and Greig Coetzee, who directed Green Mamba. Black Mamba is directed by Murray McGibbon.

Many of the first drafts of the sketches were scripted on a two-month writing holiday in Thailand, which coincided with the devastating Boxing Day Tsunami. The Mambas witnessed the tidal waves from a tiny island on the Andaman Sea, 100km south of Phuket.

"We waited three years to write the sequel and only wrote when we were inspired," says Vos. "As a result Black Mamba has its own energy, style and flow that separate it clearly from its predecessor."

"For me," Van de Ruit adds, "it feels like Black Mamba is Green Mamba all grown up, more worldly, risky and altogether more poisonous."

Book through Computicket. There are discounts for UCT staff and students. On December 5 there is a Baxter Special for R35, which includes a ticket to the show and a light meal in the Baxter Restaurant. Tickets for the 22h30 performance on New Year's Eve will cost R110.