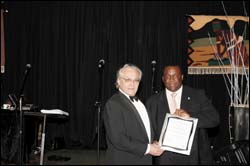 So everyone's always finding fault with telecommunications services in the country.

Well, one research locus at UCT is doing its darnedest to vamp up telecommunications, and doing a fine job of it, too, says sponsor Telkom. The UCT Centre of Excellence in Broadband Networks and Applications, one of 16 or so such Telkom research and teaching sites spread around the country, was voted the best of the lot at the annual South African Telecommunications Network and Applications Conference (SATNAC 2005), held in the Drakensberg in KwaZulu-Natal in September.

The centre is based, jointly, in UCT's electrical engineering and computer science departments, from where four groups run a score of projects related to telecommunications.

The first two units are the Communication Research Group (CRG) and the Speech Technology and Research (STAR) team, working from the Department of Electrical Engineering. In turn, the Department of Computer Science hosts the Data Network Architecture (DNA) and the Collaborative Visual Computing (CVC) groups.

All four groups, naturally, house a bunch of postgraduate students.

Two of these - Marshelleno Skosan (STAR) and David Waiting, now a doctoral student with CRG - were also decked with laurels at SATNAC, named as the best master's students at any Telkom Centre of Excellence in the country.