Clubs keep up the good fight on local front 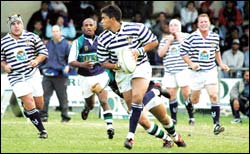 Going for glory: Isma-eel Dollie on his way to scoring against SK Walmers.

We catch up again with clubs competing in local leagues.

Athletics: The UCT Athletics Club is hitting something of a purple year. In early April, the club finished first overall at the Intervarsity Road Relay, trumping UCT Old Boys, Maties and a couple of other UCT outfits (like a group made up of graduates from the pre-1975 and late-1970 eras). At the SA Senior Champs in Durban, sprinter Divan Augustyn made it to the finals in the 400m hurdles, pitting him against some of the world's finest. Then at the Sassu Championships in Johannesburg on April 22, a UCT women's team - the club currently boasts its strongest squad in years, says chairperson William Robinson - of Unice Vorster, Kerry-Anne Marais and Margaret Brink finished third in the half marathon team competition. Lance Anders set a new UCT senior 100m hand-time record of 10.5 seconds at the competition. Finally, four women ran personal bests at the Safari Half Marathon in early May.

Hockey (men): It's neck-and-neck stuff at the top of the Grand Challenge log as reigning champions UCT A and Pinelands jockey for top spot. Pinelands still has the edge on goal difference, but wins for UCT over Central (5-3), Fish Hoek (3-0) and Central (2-1) keep the pressure on their rivals. Sadly, UCT B is still waiting to record its first win this season, losing 1-4 to Central, 0-2 to Fish Hoek and 0-3 to Pinelands over recent weeks.

Hockey (women): UCT A is cementing its second place in the women's Grand Challenge competition, and the team is yet to drop a point this season. In its last three games, the women beat Vics 2-0, Western Province Cricket Club 3-1, and Somerset West by 1-0 in a nailbiter on May 7. Sadly, league leaders Stellenbosch are pulling away as they continue to pick up bonus points in weekly goal sprees.

Netball: The shooting troubles never seem to end for the side in the WP A1 league. After a close 21-30 defeat to Tygerberg, the women recorded their first win when they beat Southerns B 41-19 (the goal shooters missed a couple of chances, but got the hang of things towards the end of the match). On May 7, though, things went awry again in a 28-59 loss to Milnerton A. It's a pressure cooker for the likes of midfielder Lyndall Daniels, who has stepped into the vacant goal attack position. "You see how hard the defenders are working, and you want to reward them," says Daniels. "But then the ball doesn't even touch the rim."

Rugby: It's another season filled with ups and downs for the FNB UCT side in the WP Super A1 league. After two disappointing defeats, the team was lifted by a 29-19 win over Bellville Tech on April 23. A week's break was followed by a 22-28 defeat to SK Walmers on May 7, notwithstanding a memorable try by fly-half Isma-eel Dollie. That's seen UCT drop to the bottom half of the log, and a long way behind Stellenbosch, who they meet in the annual intervarsity on May 27. In the inter-tertiary FNB Top Eight Competition in Potchefstroom, held from April 27-May 2, UCT lost to Pretoria and Nelson Mandela Metropolitan universities, but beat an Eastern Cape XV in its final match. 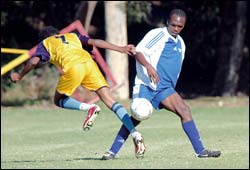 Soccer: The UCT men and women's team are still in the running for a spot at the Sassu tournament, to be played in December, following the first round of regional matches in Stellenbosch at the end of April. The men drew with Stellenbosch (1-1) as well as with the Cape Peninsula University of Technology's (CPUT) Bellville (1-1) and Cape Town (1-1) teams, and also lost 2-4 to favourites the University of the Western Cape. The women fared better, beating Maties 8-0 and CPUT (Bellville) 2-0, also drawing 1-1 with UWC but lost 0-2 to CPUT (Cape Town).

Squash (women): It's been a quiet time for the first team, what with national and provincial competitions on the go, but the side did see off Stellenbosch 4-0 (14 sets to one) to entrench itself at the top of the WP log. As expected, their rivals are putting up more of a fight this year, said captain Anne Aling. "But at the same time we've also matured a bit."

Volleyball: UCT men kept up their challenge for the WP title by beating Boland College and UCT 2 in quick succession. The side now heads the log, and boasts a perfect record of seven wins in seven matches, dropping only one set along the way. And with their surprise win over Stellenbosch, the women once again burnished their reputation as giant-killers.