Women finish season among the trophies 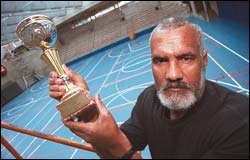 It's been another hit-and-miss year for the women's soccer first team, but there has also been some recent cause for celebration.

Like the fact that they are the maiden winners of Sassu-Western Cape's Landile Kasibe Memorial Trophy. The silverware was awarded to them for finishing top of the provincial log in the first round of the season, nosing out the universities of Stellenbosch and the Western Cape, as well as the Peninsula and Cape technikons.

Sassu established the Landile Kasibe Memorial Trophy this year in memory of the late Sassu-WP president who was killed in a car accident in 2003.

Another Sassu accolade came the team's way when Rachel Zwillinger, an international student now back at Princeton University in the US, shared the trophy as the league's top goalscorer.

More good news is that the team's administrator at Sport and Recreation, Peter Buckton (above with the Landile Kasibe Memorial Trophy), has been named as a Life Member of the Mitchell's Plain Football District.

Buckton has not only played and coached in the area for the better part of 30 years, but was also general secretary of the body until his retirement from the position a few short weeks ago.

"It makes you feel old," Buckton joked about the Life Membership last week.

Old or not, he will still coach youth and senior sides at the Westridge Football Club, of which he has also been made a Life Member, next year. When he's not hitting the books, that is - he's planning to start on his honours studies in history in 2005. At UCT, of course.