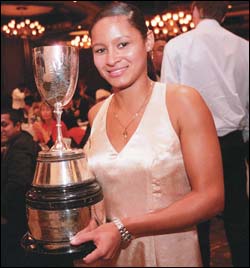 She had some stiff competition, but Liesel Dorothy, the only current UCT student to compete at the recent Athens Olympic Games, has bagged the Jamison Cup and the title of UCT 2004 Sportsperson of the Year.

The award was made to the 20-year old at the UCT Sports Awards Dinner, held at the swish Cape Town Holiday Inn on October 9. Dorothy's win tightened the stranglehold of women, who have now won it for four years in a row, on the cup.

Dorothy - who says her favourite Olympic moment was when Cathy Freeman won the 400m sprint at the Sydney Olympics in Australia in 2000 - was part of the SA women's hockey team that played their hearts out in Greece a few short months ago. Although they jumped a few places on the international rankings, the side didn't quite live up to their own ambitions. That disappointment notwithstanding, Athens was by far the highlight of the young commerce student's year, even if it did put a strain on her academic calendar (she's been on sabbatical, but starts fresh in 2005).

The UCT award came as a surprise to Dorothy, who didn't even know she had been nominated for anything until she turned up at the dinner. "It's a great honour," she managed after the event.

Dorothy wasn't the only one saluted at the dinner of course, with team, half-colour and colour awards handed to students and clubs on the night. In addition, the Sports and Recreation department honoured a dozen or so students with merit awards for their contributions to the administration of their clubs, and presented honours awards to another eight for their outstanding achievements over the year.

There was also other silverware on offer. The Best First-Year award, for the first-year UCT student with the leading sporting achievement, went to Paul Brewis who had represented the SA under-20 water polo side. Volleyball took the Club of the Year award for the progress they have made in reviving a once moribund outfit. Capoeira's JJ de Castro Maia and Margot Scheffer of the gymnastics club won the Transformation Trophy for teaming up their clubs with a Shawco project in Manenberg. Ramzi Solomon, chair of Sassu-UCT, won the Turpin Cup for service to UCT sport. The women's squash first team, the first women's squad from UCT to win the WP league in 14 years, landed the Butterworth Cup as Team of the Year. And the FNB UCT First XV cheered loudest when they were named as the winners of the Landstem Trophy, made to an individual or team who recorded the chart-topping sports performance of the year, for their rugby Intervarsity win over Maties in May.

A staff member also made a rare appearance on the winner's podium. Sports administrator Keith Hart, elected to the management team that watched over the SA squad at the World Student Rowing Championships, held in France in September, received the Chairperson's Award from Professor John Simpson, chair of UCT's Sports Council.