Cricket side rings the changes 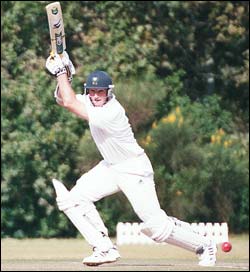 Slamming: Graeme Smith storms to a century for UCT on the first day of its match against Bellville.

Things had looked so promising for the UCT first team on the opening day of the cricket season, October 2.

Six wickets by new recruit Rory Kleinveldt, a Western Province regular, helped them to force the hand of Midmar Bellville, who declared on 251/9 about midway through the day. UCT quickly matched that score, thanks in large to a breezy century by Proteas skipper Graeme Smith ("Biff" to his UCT teammates), who had made a momentary return to the club he played for but two seasons ago.

UCT declared that evening, which meant there was everything to play for on the second day, October 9, when all the superstars were back with the provincial squad. Or so you would think. Bellville made it clear at about 15h00 that they were going to bat through, so UCT grudgingly agreed to call it a day.

Bellville's long stand did however point to certain shortcomings in the UCT bowling, an area that had suffered a huge blow when 2003/2004 player-coach Brian Murphy, always good for a handful of wickets, decided to settle down in the UK. Neil Kruger, captain last season, is also missing from the line-up, choosing to concentrate on his medical studies over the next couple of months.

New captain Doug Worth is upbeat, however. And for good reason. Brian McMillan, the former WP and SA star, will be coaching the side this season. "He knows plenty about the game, and he's keen and willing to help, which is great for UCT cricket." McMillan is introducing discipline and a sense of professionalism among the players, adds Worth, qualities lacking in a team that had essentially been "student-run" last season.

And the pool of talent at UCT has mushroomed, says Worth. "We've never had a situation like we do now where the second-team players are knocking on the door of the first team."

With Big Mac at the helm and Big Doug leading from the front, things can only get interesting.