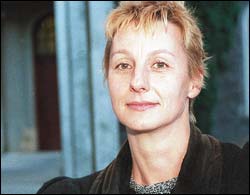 Vicki Scholtz has been voted in as president of the UCT Employees' Union (UCTEU) for a third term.

Scholtz, first elected to the position in 2002, accepted the appointment at the first meeting of the union's newly-elected executive committee last week. Andrea Plos was named as vice-president at the same gathering, while Liz Utting was appointed to take over the bean-counting duties from the much-beloved Glenn Anderson, who stepped down as union treasurer recently. But it's not adieu to Anderson - although he's waiting to hear whether he will be retiring at 60 or 65 - who has been co-opted onto the UCTEU exec.

The committee also features a number of first-timers this year - Lillian Goredema, Hein Kleinbooi, Megan Morris and Isabelle Ncube, together with returnee Linda Haynes, complete the 2004/2005 numbers. The union does have the option, however, of co-opting one more staff member to the executive.

A couple of processes and hot topics will demand the committee's attentions over the next year, noted Scholtz. These include issues around performance-related remuneration (a task team that includes the EU, staff members and management is currently deliberating on this) and the retirement age for professional and support staff. The committee is also involved in the re-negotiation of a number of policies and procedures, including the union's recognition agreement with UCT.

One major challenge for the union - as a whole - is to build on the groundswell sparked in the run-up to and during last year's wage negotiations. But that hike in support, said Scholtz, had to do with more than just money - much of the discussions at the time centred on how (or whether) professional and support staff are valued at UCT.

"What we need to look at are campaigns that come from the members themselves, such as ones on the retirement age, transformation, and things around the private work policy. We need to maintain and strengthen the momentum from last year, and use that energy in directions that members want to see it going."