Challenge of being dean's secretary 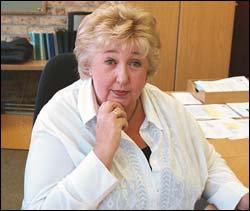 Having worked as the dean's secretary for 26 years, Erica Schulschenk has seen the comings and goings of three permanent deans and three acting deans in the Faculty of Engineering and the Built Environment.

But she has fond memories and warm words for all her bosses, including the current dean Professor Cyril O'Connor, whom she describes as "the hyperactive child I never wanted".

O'Connor nominated Schulschenk as this week's Five-Star Staffer, saying she is a "superstar who is generally regarded, as far as I'm aware, as arguably one of the finest secretaries at UCT".

According to O'Connor, it is Schulschenk's professionalism and attention to detail which sets her apart from the rest.

"It is often jokingly said, by me mostly, that if the dean disappeared and Erica ran the show it would be many months before anybody woke up to the fact that I was missing!"

Not one to shy away from a challenge, Schulschenk manages myriad portfolios ensuring the smooth running of the dean's office. This includes organising the faculty's social functions, inaugural lectures and building renovations.

"When I come into the office in the morning, I never know what the day is going to bring. This variety is the best part of my job," she explained.

However, it was the construction of the John Martin Room that will remain in Schulschenk's mind long after she retires.

"It used to be an old lecture theatre and we turned it into offices and our faculty board room. I enjoyed being involved in the project and equipping and furnishing the venue. It's wonderful to think that long after I'm gone, it will still be here."

Described by a colleague as "suffering from severe techno lust", Schulschenk has had to embrace various technological advances.

"Technology has changed so much since I started at UCT. I have had to welcome the change as I am part of a faculty that boasts the latest technological gadgets. Things like my electronic diary definitely make my job easier."

Schulschenk believes it is her ability to build lasting relationships with the deans that has contributed to her success.

"Over the years, I've been fortunate enough to get to know each dean's family. Because you are so personally involved in their lives, you start to feel part of their family. One of my greatest joys is when they remain in contact long after they leave."