UCT soccer among the leaders 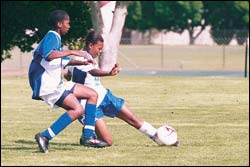 Falling over with excitement: UCT's Zizipho Mmango slides in a cross before Xoliswa Nkonyeni of UWC can stop her in the sides' 1-1 draw at the SASSU games.

Nine UCT players - six men and three women - have been selected for the respective Western Province squads following the recent SASSU soccer tournament, which doubles as trials for the provincial sides, held at the University of Stellenbosch from April 23 to 27.

The UCT women will consider themselves unlucky to have only three players named for the WP team – the side did, after all, do pretty well at the Stellenbosch event, recording two wins and scoring 10 goals in total. UCT beat the hosts 4-3 in its first match, lost 0-1 to Cape Technikon, drew 1-1 with the University of the Western Cape, and then swamped Peninsula Technikon 5-0 on the last day.

The men, after a promising start, didn't do nearly as well. They beat Stellenbosch 2-1 and drew 0-0 with UWC, but then lost 0-4 to Pentech and 0-1 to Cape Tech.

Either way, the players will shortly be convened for a camp, where final WP teams will be named. These sides will then vie for honours against other provincial teams at a SASSU tournament to be hosted by UWC and Pentech in July.