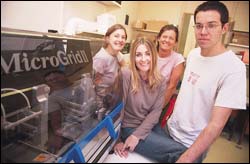 The man of the hour: Prof John de Gruchy has received an honorary degree in literature from Rhodes University.

Professor John de Gruchy, one of the first humanities scholars at UCT to receive an A-rating from the National Research Foundation (NRF), has picked up an honorary doctorate from Rhodes University.

De Gruchy, the Robert Selby Taylor professor of Christian studies at UCT, was capped by Rhodes chancellor, Jakes Gerwel, at one of that institution's recent April graduation ceremonies. He was awarded an honorary doctorate in literature.

De Gruchy didn't start out in academia - ordained as a minister in the United Congregational Church of South Africa in 1961, he served congregations in Durban, Johannesburg and Cape Town. He also served the South African Council of Churches for five years. In 1973, he joined UCT's Department of Religious Studies as a lecturer.

His research focuses on three main areas - the theology of the German theologian Dietrich Bonhoeffer and the Church's struggle against the Nazis; South African church history, especially that of the 20th century; and the link between Christianity and the arts.

A surprise call from Rhodes last year, when they alerted him to the honour, was as unexpected as it was pleasing, noted De Gruchy, who admits that he's had little contact with the Grahamstown university since his studies there. "It came totally out of the blue," he said.